The Zen of Screenwriting by S. Lane Porter

It comes as no surprise to us that it takes more than the actual act of screenwriting to get comfortable with all of the elements a person must understand before turning out material that can be sold AND filmed, especially in the indie market.  S. Lane gets down to the nitty gritty of why just writing isn’t enough anymore.

The Zen of Screenwriting.

You may think that you can sift through the bookstore, purchase a few screenwriting books, watch a few movies and then type out the next big flick to hit the theaters. Maybe you can, but I sincerely doubt it.

When you put together a model car, you follow directions, you glue together the pieces but when you’re through, do you understand the essence of the car? Do you understand the organism of a thousand parts working in unison after slapping on the last pin stripe decal? No, to understand that you’d have to build a actual vehicle from the ground up. The same applies to writing efficiently for independent films.

To fully understand the art of screenwriting, you must experience the birth of one from the ground up. You’ve got the writing part down, but what about production, or pre-production?

If you want to be a successful writer, especially in the independent film industry, you’re going to have to know how to write for them and to do that you have to become a part of the organism.

How do you do that?

The Simple Way: Become a Production Assistant for an independent feature film and learn filmmaking and hence screenwriting from the inside out.  If you have the luck of becoming a PA on a large studio film, you’re off to a good start, but you’re most likely going to land work in the independent film arena first.

As a Production Assistant you’ll be given a set amount of duties, but with that comes a tremendous amount of waiting. With that extra time you can study the call sheets, watch how locations and camera shots are organized, visualize story structure backwards and forwards, and watch the money flow. By that I mean you can see where they spend their money and where they’re thrifty. These are the most significant concepts I took from working in the independent film industry before I felt confident enough to write one suitable for their needs.  It’s a lot like learning the art of screenwriting through osmosis.

You don’t need to spend years working in film to write them, but I want to stress that you should at least participate in one feature film. That could mean as a P.A. or it could mean as the Director of your own film. Personally, I think you’d learn more from an observational role as production assistant, but some people like to dive in head first and I applaud that.

So how do I become a Production Assistant?

You can start by visiting reliable job boards like Mandy.Com or CrewNet.Com. Less reliable is Craigslist in your area, but occasionally production companies with good intentions do place ads here looking for crew. On these sites you can filter for only paying jobs, or positions that have no pay (internships, etc).

You can P.A. for just about every department without any experience but it helps if you approach an area you’re comfortable handling. I came from a theatre background in stage management so taking on set continuity came easily to me and I ended up in the art department. If you want to know a little bit about how to land a job and how to act on set when you get one, I recommend picking up a copy of “Breaking and Entering: Landing Your First Job in Film Production” by April Fitzsimmons. 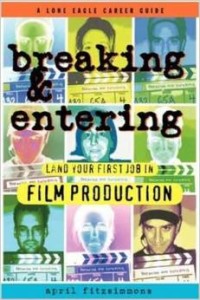 One word of warning:

Making films is just as exciting as writing them. You may get derailed by your creative prowess as your boss drags you from one production to another. Do it if it thrills you, but understand that you’re working 16+ hours a day and that leaves little time to write.

I do not regret being lured by the process of creating a wondrous piece of art from a stack of paper, but there is a cost. You lose time to write while you’re working on a film, so don’t lose sight of your goals and keep writing!