My ‘Art’ Has Hurt A Lot Of People, Part One by Kris Hulbert

Write Vault would like to introduce Kris Hulbert of Gratwick Films.

Today and next week Kris takes us on his personal journey to becoming a filmmaker. We find our passion on a different travels throughout the world, but as artists, we can all see the road is very familiar when we hear another’s tale. Part Two is available here.

My ‘Art’ Has Hurt A Lot Of People
Part One

I never got into this business for the money, the fame or any of the many other superficial reasons so many people are infatuated and lured to the entertainment industry. I’ve also never honestly met a truly rich person. Everyone I’ve ever met, even the ones that appear to live comfortably, have struggled and still struggle to make ends meet.  These two seemingly harmless facts are why a lot of people have been hurt by my morals, my natural talent, my art.

For the first 30 years of my life I got by on raw talent, instincts and a lightning quick wit, in a place like Buffalo that sentenced my 20’s to a decade as a bill collector.  It never occurred to me that the entertainment industry offered real careers. I knew I had a knack for telling stories and making people laugh, but in Buffalo that just meant I was misfit clogging the social cycle.

Then, at 30, after arguing with America for 10 years, I had a breakdown (or an epiphany) in the middle of yet another argument about what a piece of shit I was because someone else wouldn’t pay their bills.  I quit my job on the spot. I took my tax return and split for Los Angeles to live on a buddy’s couch in a tiny, one bedroom apartment in the Hollywood Hills while I figured out what next to do.

Over the next two years, I was exposed to inspiration, creativity, and opportunities in an entertainment industry where the only hardened rule was that talent supersedes all. I slowly started to wake up and come alive.  For the first time in my life I was on a path to finding myself, and along the way it hit me that this is what I was put here to do.  As time went on, I learned that my voice was my power and that I could use that power to inspire others.

I fell in love with my muse and found myself even more inspired. After just two years together, we went from shooting a guerrilla comedy on the weekends in the streets of L.A. to pissing off some of the biggest distribution companies in the world by refusing to just bend over and give away our life’s work.

Fresh off the confidence of making a 72 minute, $300, crude homage to Kevin Smith where I had reserved a theater in my hometown and proceeded to fly all the way back home so I could humiliate myself in front of all my family, friends, haters and well-wishers, with what I thought was a movie.  Humiliation motivated me to take the next step in our self-groomed trek to the top.

For us, the next step was supposed to be a small $5,000 movie with a real, but tiny crew and actual actors who were like us in the fact they also aspired to be professionals.  It’s important to know that I have never been one to work within the boundaries of what I think I can do  instead I discover what I can do along the way.  I prefer to shoot for the moon and calibrate on the fly.  What started as a fun learning experience with a small amount of money nobody would miss quickly evolved into a $25,000 budget that included flying everyone to Buffalo to shoot the film in my grandfather’s basement.  Then it snowballed to an $80,000 budget once we cast some minor horror genre stars.

We never set out to spend that kind of money.  We didn’t even have a clue how to raise that kind of money.  All we knew was that our passion and our sincerity opened a lot of doors on a train that was starting to roll faster than we ever expected.  We did our best to hold on.  To raise the money, a DP suggested we shoot a spec trailer, which we did. Looking back, it was an omen of things to come.  The footage blew our expectations out of the water and opened our minds to what we might be capable of creating.  Unfortunately, when hints of future success emerge on your path, mountains of greed and insecurities are sure to be on the horizon.  Our fun, relaxed spec trailer was crewed with friends and craigslist volunteers that also included a house-wife from Orange County who thought it would be fun to play producer. Things turned deadly serious lightning quick when I was pulled aside by the housewife because she felt it was necessary to warn me that her husband was a real estate big shot and if we ever thought about getting rid of her, for any reason, she would sue us into oblivion.  At that point I was just happy people gave us their weekend, it never occurred to me to dump anyone until that very moment, when I knew she had to go.

Armed with a damned good spec trailer and a few months before the date we optimistically set for shooting, my girlfriend/partner and I gave up our apartment put our belongings in storage and returned to Buffalo to prepare for the production and attempt to raise local funds while the rest of our team did the same on the west coast.  We made sure to leave our stuff in storage so we would we have no choice but to come back.  Our presence caused an immediate rift in my adversity challenged family after a family Easter gathering exposed true colors.  We were accused of lying and making everything up as an excuse for flunking out of Hollywood and crawling home. Less than a week after our return, we were on the verge of being kicked out and having to look for jobs.  The dream was all but dead as the hometown curse sucked us in deeper and deeper.

Despite everything, 4 months after we returned to Buffalo, we were a week away from production with flights for cast and crew already paid for thanks to a few thousand we raised from two crazy first investors who were family friends.  The only problem? We had no more funding. We had been jerked around for months by a local business man who promised us we would have our budget, we should just keep preparing for production while he took care of the money. We trusted him mostly because he told us what we wanted to hear. That’s what you do when you’re foolish, desperate, and from Buffalo.  Our full budget still called for $65,000, but to just get through production we had signed contracts that would cost at least $30,000.  At that point, whether we made a movie or not, I would be paying these people every dollar I earned for the foreseeable future. At the last minute, my family stepped in to come up with the bare minimum needed to get through production, a second mortgage was taken (during a mortgage crisis) and 401ks were borrowed from.

Over the next two weeks we shot the entire film, while my aging 83 year old grandfather (and former Drill Sergeant) watched Jerry Springer upstairs as the strange noises from his basement volleyed him back and forth between “yes, you can shoot” and “get these thieving strangers out of my house”.  One minute he was calling old war buddies offering ‘tours of Hollywood’ and the next he was blaming the crew for any knick or scratch that had happened to the property over the last 40 years.  After a long, long day of shooting, there were sadly many nights where my crew had to deal with family blowouts.  The Producer/Director was constantly forced to choose between being a good grandson and a competent producer, and until that point I had had little experience in either one.

But when the dust settled and all was said and done, our bunch of rebellious, reckless amateurs made it through a production we had no business pulling off with footage so good that we couldn’t possibly fathom the pain and suffering it would cause.

Once it was over, the rest of the team and my footage all flew back to Los Angeles while my partner and I remained stuck in Buffalo because all our personal money to get back had already been put into completing the film’s budget.  Eventually her parents, modest working folks in Iowa, lent us money just to make sure we got out of Buffalo. I’m pretty sure they were afraid their daughter was suicidal over the thought of being stuck.

We headed back to Los Angeles to rejoin out film already in the editing process and the real trouble was just beginning to form on the not so distant horizon.  Pure passion had overcome massive project-wide inexperience during production, but as the post production process and the business of distribution became our focus we would not get anywhere near as lucky as we had been to that point.  The roosters were definitely gearing up to come home to roost. 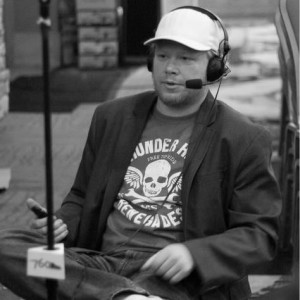 Kris Hulbert is an independent filmmaker and storyteller with a compulsive obsession with the truth.  In 2007, I founded Gratwick Films, a company committed to our model of Social Filmmaking. Social Filmmaking uses total transparency to create socially interactive entertainment that is also socially responsible and accountable. To accomplish this we surround every film we make with real time reality style content documenting the making of the film.  We then use our entertainment to raise money and awareness for causes that benefit society.